Law of the Land: Highlights of Singapore’s Constitutional Documents 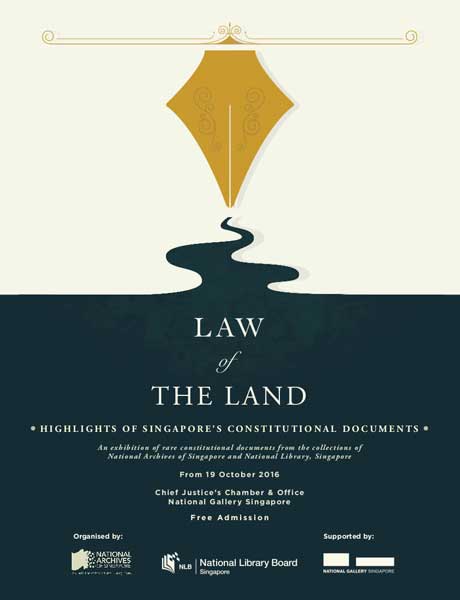 A constitution is a legal document that lays out the structure of government and the fundamental laws and principles governing a country and its people. In Singapore, the Constitution of the Republic of Singapore is the supreme law of the land that all other local laws must conform to. It prescribes the important distribution of authority between the three arms of the state: the legislature, the executive and the judiciary. It safeguards fundamental rights Singaporeans enjoy, such as equality before the law, equal protection of the law and the freedom of religion, among others. The sovereignty of Singapore is entrenched within the constitution. It has been called a “pragmatic document” that provides the framework for social, political and economic development that helps Singapore thrive.

Law of the Land: Highlights of Singapore’s Constitutional Documents explores the history and development of Singapore’s constitution from Singapore’s founding as a British settlement in 1819 to its emergence as a sovereign republic in 1965.

The exhibition features rare constitutional documents from the collections of the National Archives of Singapore and National Library, Singapore. The documents capture key moments in Singapore’s constitutional history and also throw light on milestones in our island-nation’s history.

The exhibition is held at the historic former Chief Justice’s Chamber and Office at the National Gallery Singapore.

Announcement: All tours have been suspended due to Covid-19 restrictions. Stay tuned to this page for resumption of events/tours related to this exhibition.

Public talks accompany the exhibition from 2017. Watch this space for more details.

Raffles promulgated six regulations in 1823, forming the earliest administrative and legal code in Singapore after the arrival of the British.

This charter affirmed the reception of English law in Singapore and provided the settlement with its own professional judge, then known as a Recorder.

This document approved a new coat of arms for the Singapore Municipal Commission in 1948. The Municipal Commission was the first public institution to be installed with a popularly elected majority – 18 out of the 27 commission members were elected. The elections served as a form of political education for the people of Singapore in preparation for self-governance.

This document, better known as the Rendel Constitution, granted the automatic registration of voters that significantly increased the number of people eligible to vote from about 70,000 to 300,000. This allowed for mass participation in Singapore elections for the first time.

This constitution marked a political milestone for Singapore, which ceased being a British colony and became a self-governing state within the British Commonwealth. The office of Governor was abolished, and Singapore obtained its own head of state in the Yang di-Pertuan Negara. The first local Yang di-Pertuan Negara was Yusof bin Ishak who was appointed on 3 December 1959.

On the back of this government envelope are Prime Minister Lee Kuan Yew’s handwritten notes regarding certain aspects of merger discussed and agreed with Malaya’s Prime Minister Tunku Abdul Rahman. 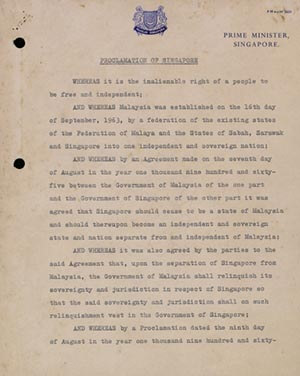 Proclamation of the Republic of Singapore - 9 August 1965

This proclamation declared Singapore’s separation from Malaysia and its beginnings as an independent and sovereign republic.

The Supreme Court building and the Chief Justice’s Chamber and Office were designed by the government’s architect Frank Dorrington War and completed in 1939.

Some original antique furniture in the Chief Justice’s Chamber and Office is integrated with the exhibition. These pieces were hand carved by Singaporean craftsmen trained in British workmanship. Teak wood was predominantly used along with top grade leather upholstery.