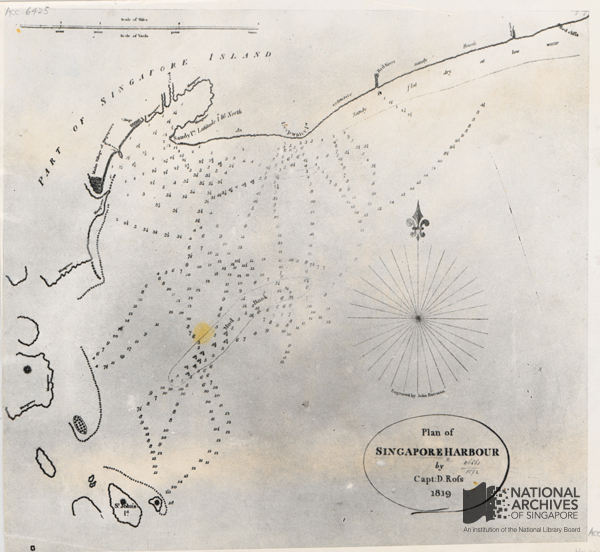 One of the earliest British surveys of Singapore island, this map shows Singapore harbour and adjacent areas, including a few offshore islands, such as the St. John’s Island, at the time of Stamford Raffles’ first landing on Singapore. Captain Daniel Rofs (also commonly spelt as Ross), the hydrographer of the East India Company (EIC) who accompanied Raffles and William Farquhar to Singapore, prepared the map while Raffles was negotiating a Preliminary Agreement between EIC and the Temenggong.

The Agreement, which was made on 30 January 1819, enabled the EIC to establish a factory in Singapore or any other place under the Government of Singapore-Johore, on the account that protection and an annual sum of 3,000 Spanish dollars were given to the latter. Ross’ survey was subsequently published by another hydrographer of the EIC, James Horsburgh, in 1820.

The map represents many cartographic firsts for Singapore. Firstly, it is probably the earliest map of Singapore waters and at a scale of 1:32,000 it is also the first large-scale map of Singapore. Secondly, this is the first map that shows Malay villages and clusters of settlements on the island. Thirdly, it is the first time that the name ‘Singapore’ was used in place of ‘Sincapore’ and its other spelling variations which appeared in earlier European cartographic records of the region.

A sizeable Malay village is shown situated at the north bank of a river inlet (Singapore River) to the southwest of Sandy Point. This village was where the Temenggong resided.

By early 19th century, development of scientific methods of geodetic survey and the advancement of surveying equipment such as the marine chronometer, allowed surveyors to accurately calculate latitude, both at sea and on land. Interestingly, the latitude of “1o16’ North” was noted on the map at Sandy Point. It was possibly the reference point used by Ross when he conducted the survey of the harbour.