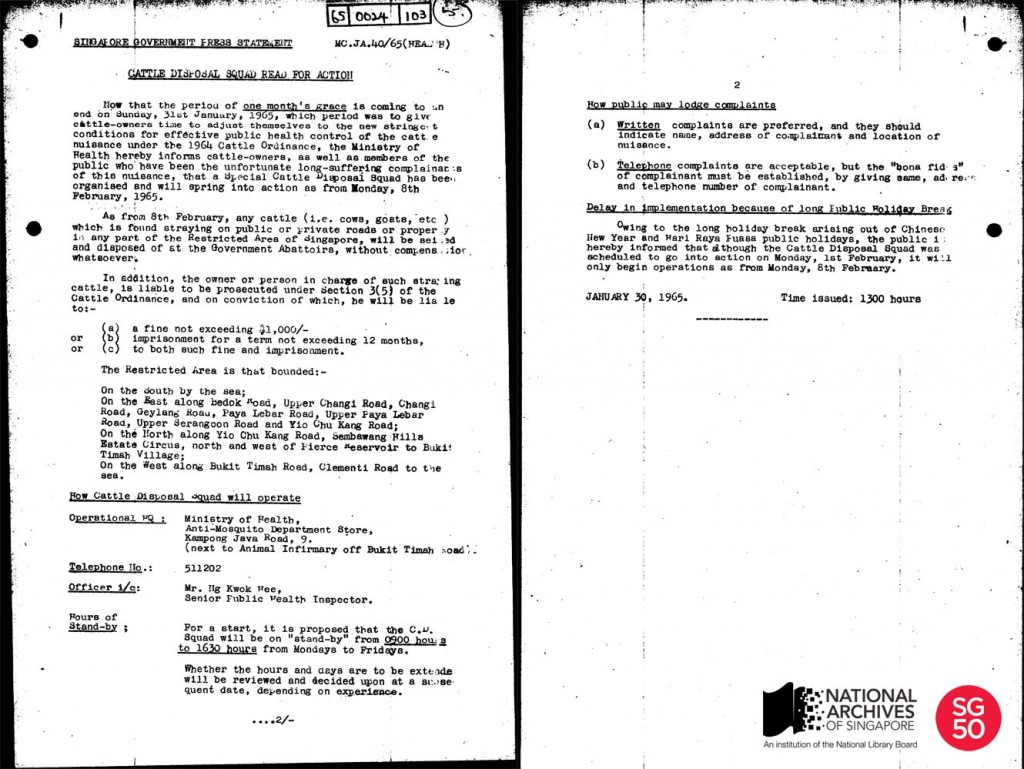 The Cattle Ordinance came into operation on 1 January 1965. The law was intended to prevent cattle-farming and the consequent straying of cattle in the city and built-up suburban areas. The animals were seen to pose a threat to public health due to their waste. The enactment of the law was also precipitated by safety issues. The Straits Times reported on 16 November 1964 that a Singapore lawyer, Mr Lim Seow Beng, was killed on his way home when his car plunged into a monsoon drain after hitting a cow along Oriole Crescent.

A cattle disposal squad from the Ministry of Health went into action on 8 February 1965. Cattle, which was defined to include cows, sheep, goats and swine, were seized without compensation if found in “Restricted Areas” where cattle were not to be kept. The squad would organise raids with police escort to seize animals and arrest owners. The animals seized were slaughtered and the meat was distributed to welfare homes. By 1969, a total of 136 animals had been seized. The law remains in force to this day.

As Singapore has become more developed, instead of setting out areas where cattle cannot be kept, it has been easier to set out the limited number of areas where cattle may be kept. The Cattle (Unrestricted Areas) Notification of 1989 sets out 7 areas – the Lim Chu Kang Agrotechnology Park, the Primary Production Department’s Sembawang Field Experimental Station, the Jurong Abattoir, the small island of Terumbu Pesek (off Jurong Industrial Estate), the Kim Chuan Abattoir at Paya Lebar, Tech Park Crescent at Tuas and at the Singapore Zoological Gardens.