Security problems dominating the first decade had largely receded by the second decade. Bilateral ties with Indonesia steadily improved following the end of Konfrontasi in 1966. Communist insurgency, while still a risk, was under control by the mid-1970s.

However, new problems emerged. In 1975, South Vietnam, Cambodia and Laos fell to Communism, and fears grew that other Southeast Asian countries could follow like a row of falling dominos. The security situation worsened in 1978 when Vietnam invaded and occupied Cambodia with the backing of its ally the Soviet Union. Tensions remained high the following year as China fought Vietnam in a short but fierce border war in support of Cambodia.

With Vietnam and the Soviet Union asserting themselves militarily, China was drawn into the picture. In contrast, the United States (US) and Great Britain were scaling back their presence in Southeast Asia. This left the region threatened by political instability, affecting trade and foreign investments.

Furthermore, after a decade of growth, the SAF needed to upgrade its defence equipment to keep up with regional political changes. 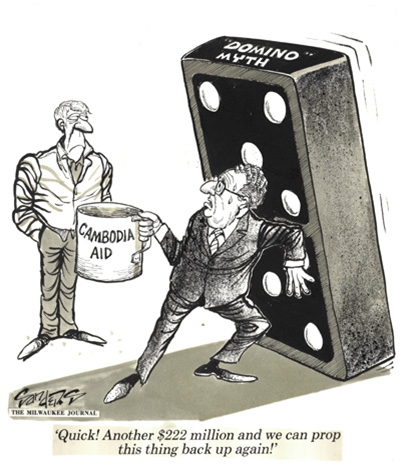 The domino theory was first proposed by United States President Dwight D. Eisenhower in 1954. The theory predicted that if a country came under communist influence, the countries surrounding it would soon follow, toppling like a row of falling dominos. Milwaukee Journal, courtesy of NAS.