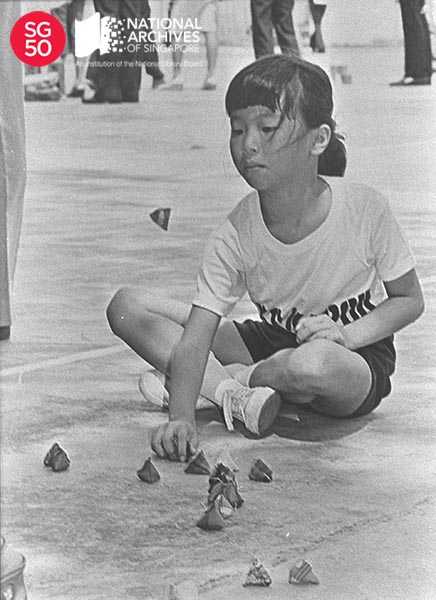 Five stones used to be a popular kampong game which was originally played with real stones of the same size. It was later played using five small triangular bags made out of scrap cloth and filled either with sand, rice or dried beans. Traditionally handmade, these triangular cloth bags can also be bought at selected shops.

The aim of the game is to score points by completing a set of eight steps. The winner is the person who completes the full set the most times. It is played by two or more players and requires good hand-eye coordination.

To start, the player would pile all five stones on the back of her hand, toss them up and catch as many stones as possible with the palm of the same hand. Whoever catches the most begins the game. The player will toss the stones in the air and catch them in a variety of patterns. If a stone is not caught in time or the player accidently touches or moves a stone that should not be picked up, she will lose her turn to her opponent. If the opponent fails to complete a step, the other player will begin the next turn at the step that she did not finish earlier.