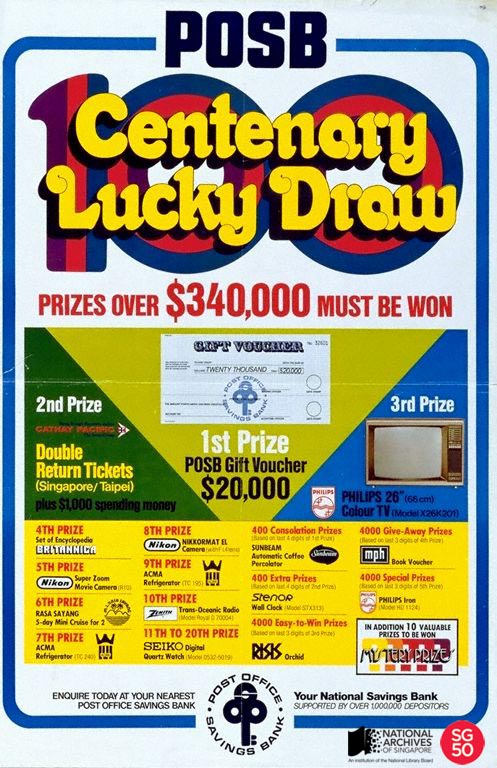 The Post Office Savings Bank (POSB) was established by the British Colonial Government as far back as 1 January 1877 as part of the Postal Services Department of the General Post Office. Services were first provided at the General Post Office Building (now Fullerton Hotel). In its first year, the interest given was 5 percent and there were 211 depositors with $19,864.90 standing to their credit.

The POSB was then part of a larger Straits Settlements Post Office Savings Bank covering Malacca, Penang and Singapore and it eventually came under the management of the Postmaster-General, States of Malaya. After separation from Malaysia and independence, the accounts of some 250,000 Singapore depositors finally came under the care of the Postmaster-General of Singapore when they were transferred about a year later on 8 July 1966.

By early 1976, shortly before its centenary year, the POSB had celebrated the opening of its one millionth account. This was in part due to the success of the School Savings Campaign that began in 1969 to encourage thrift in children and provide an easy means of depositing savings.

The domestic savings mobilised under the POSB were channelled to finance national development projects to build and improve much needed infrastructure in the early years of Singapore.

In 1972, POSB was reorganised as a statutory board and it was acquired by the Development Bank of Singapore in 1998.