Oral History Interview on the Origins of 'Roti John', Recorded in 2002

ORAL HISTORY INTERVIEW ON THE ORIGINS OF ‘ROTI JOHN’, RECORDED IN 2002 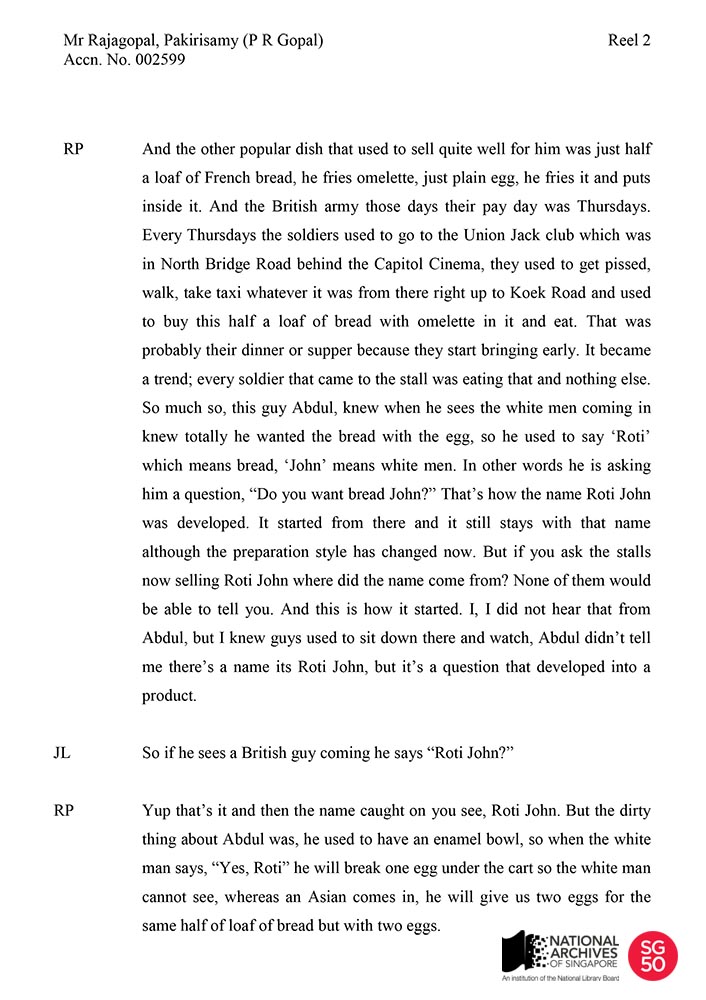 Touted as the local version of the burger, Roti John is made up of a French loaf split in half lengthwise, spread with a mix of minced meat, vegetables, chopped onions and a beaten egg. The bread with the toppings is then slapped down onto a hot pan and fried until it becomes crispy on the outside, but still soft on the inside.

There are different versions to the origins of this popular hawker dish. Mr Pakirisamy Rajagopal shared in his oral history interview that Roti John originated from the road side stalls at Koek Road. According to Mr Rajagopal, there was a push cart stall ran by Abdul, an Indian-Muslim who served Roti John to English servicemen. Whenever he saw them, Abdul would ask, “Roti, John?” which was intended to ask the question “Do you want bread John?” John was a term used by him to refer to Caucasian soldiers. The name “Roti John” then caught on.

According to another story from the 1960s, Roti John was first served when a Malay hawker in Sembawang cooked a special omelette sandwich for an Englishman who wanted to eat a burger. The local press then reported that the dish could be bought in areas where there was a large concentration of English servicemen such as at Changi, Alexandra, Nee Soon, Sembawang, Bedok, and Orchard Road.

This dish is now readily available throughout Singapore.

To listen to the full interview online, click here. Mr Rajagopal speaks about the road side stalls at Koek Road on Reel 2, from 19:50 onwards.