The decade saw the SAF develop a substantially stronger navy and air force and make continuous enhancements to the army in its efforts to transform itself into a technologically superior armed forces.

The new equipment made fuller use of Singapore’s increasingly well-educated soldiers who were able to quickly absorb the more complex training required to handle them. They also enabled the SAF to be leaner but more deadly, making up for the gradual decline in national serviceman intakes from the late 1970s due to falling birth rates. As Minister of Defence Dr Goh Keng Swee related in Parliament in August 1977:“It is necessary to economise the use of manpower. As a result of successful family planning in past years, the number of young men available for national service in future years will show a steady but relentless decline. In 10 years time, the number available will be nearly 30 per cent less than what it is now…”[1]

Addendum to Presidential Address by Minister of Defence Dr Goh Keng Swee at the Opening of the First Session of the Fourth Parliament on Tuesday, 8th February 1977- Ministry of Defence. Ministry of Culture, courtesy of NAS. Ref.: bhs19770208cs.

Apart from making improvements in hardware, the second decade saw new initiatives to attract talented Singaporeans into the armed forces. The public and professional image of the SAF was improved through public education campaigns, as well as job enhancements for SAF personnel, like better career development, overseas training opportunities, and tertiary education scholarships. 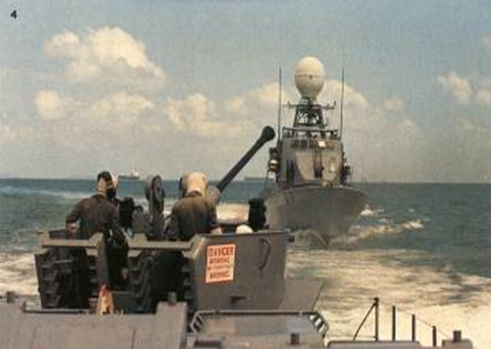 “We have had National Service for 15 years now. I believe, however, that we have not yet built up a close and natural relationship between the SAF and the people. There is still an inadequate appreciation of the importance of SAF officers.

For example, our society as a whole does not accord SAF officers the esteem they deserve. A Colonel commanding a division of 15,000 men does not carry the same prestige as a doctor in social circles. Yet, the doctor’s survival, indeed, the whole country’s survival, in times of war, may depend on that Colonel and his 15,000 men.” [2]

Speech by Goh Chok Tong, Minister for Defence at the Promotion Ceremony for Reservist Officers, at Beach Road Camp on Tuesday, 29 June 1982. Ministry of culture, courtesy of NAS. Ref.: gct19820629s

The handy and accurate Ultimax 100 light machine gun was developed by Chartered Industries of Singapore with guidance from Jim Sullivan, a renowned firearms designer who co-designed the M-16 rifle. Introduced to the SAF in 1983, it remains the lightest 5.56mm calibre machine gun in the world. Fighting Fit-The Singapore Armed Forces, 1990, courtesy of NAS. 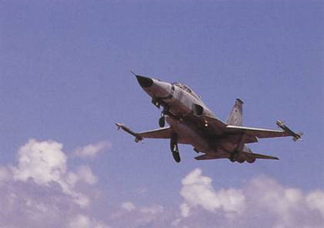 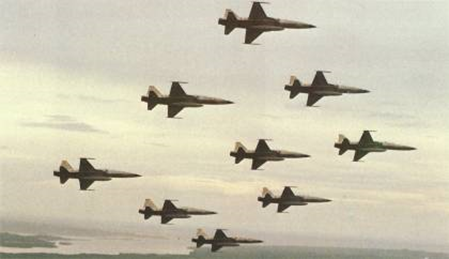 The SAF enhanced its air defences considerably in the second decade. High-tech anti-aircraft missiles were acquired, like the American Improved Hawk missile and the man-portable Swedish 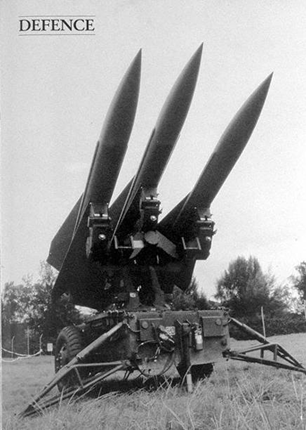 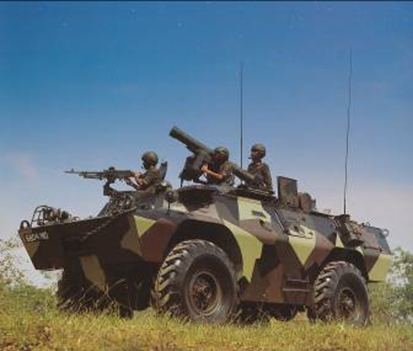 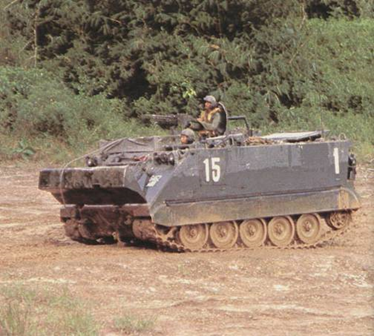 In the second decade, American M113 armoured personnel carriers were purchased to replace our ageing fleet of V200 armoured vehicles, which were redesignated for air defence. The M113 was equipped with tracks, which enhanced manoeuvrability over rough terrain. MINDEF, courtesy of NAS. 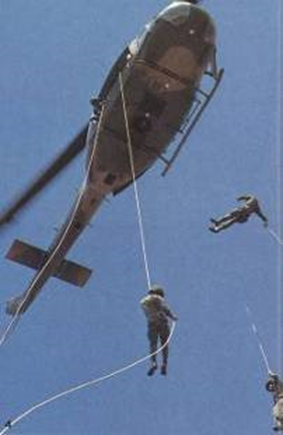 The American Bell UH-1H “Huey” helicopter was introduced to the SAF in 1977. The “Huey” was used to transport the SAF’s elite Commandos and Guardsmen, and was an integral part of early SAF efforts to develop the capacity to launch large-scale heliborne operations. MINDEF, courtesy of NAS. 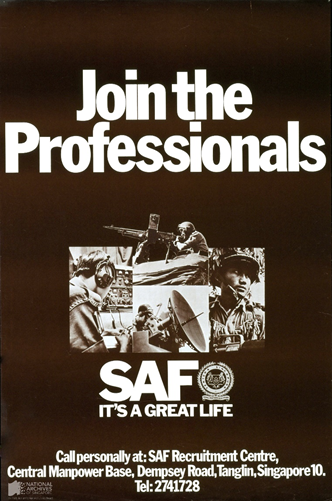 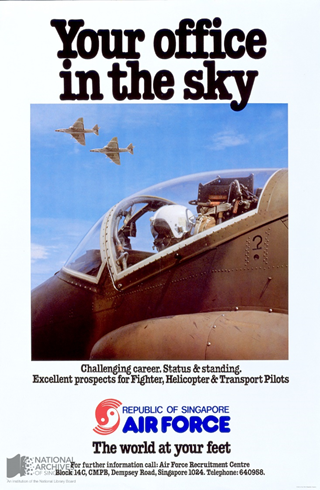 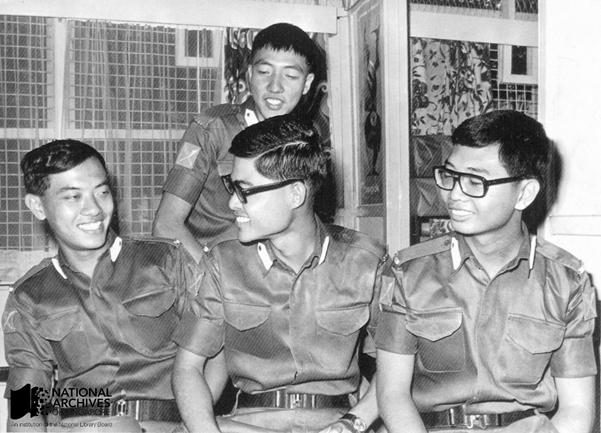 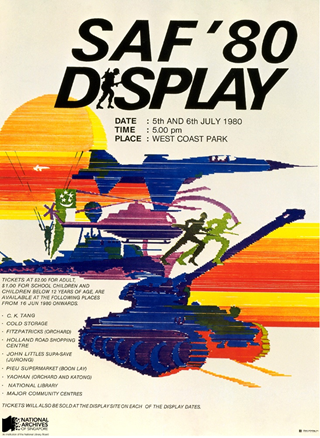 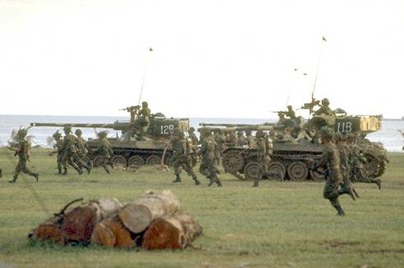 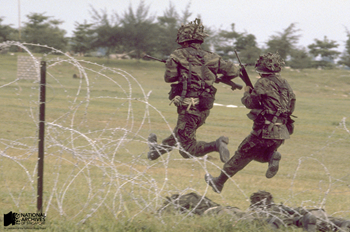 SAF Display ’83, in celebration of Armed Forces Day, at West Coast Park. Ministry of Information, Communications and the Arts, courtesy of NAS. Ref.: 19980006807. 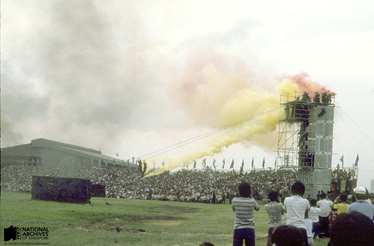 Scenes from the SAF Display, 1983. Simulated assault on enemy positions by SAF armoured (top) and infantry forces (below) as well as a demonstration of the fire fox in simulated combat conditions (below). Ministry of Culture, courtesy of NAS. Ref.: 19980006807-0102

[2] Speech by Goh Chok Tong, Minister for Defence at the Promotion Ceremony for Reservist Officers, at Beach Road Camp on Tuesday, 29 June 1982. Ministry of culture, courtesy of NAS. Ref.: gct19820629s