75 years ago on this date, shortly after 4am, people living in Singapore had their first experience of aerial bombings. Japanese naval bombers and Zero fighter planes bombed the town area, hitting Chinatown and Raffles Place, as well as the airfields at Seletar and Tengah. This was the first time that civilians living in Singapore experienced war right at their doorsteps.

We heard some bombing sounds. We didn’t know they were bombing sounds but we heard some explosions. My father got up, went to the window of the house and I was awakened also and we looked out and so on. We didn’t know what was happening, why these explosions were taking place. But then suddenly, we heard the air raid sirens. But the air raid sirens were sounding when the Japanese bombers had left. They had already dropped their bombs. Oral history interview with Rudy William Mosbergen (2006), Accession Number 003051/1

Mr Mosbergen was not alone in being caught by surprise. The air raids on Singapore happened shortly after the unexpected Japanese bombing of Pearl Harbor on 7 December 1941 (Hawaiian time), the fateful day which President Roosevelt described as “a date which will live in infamy”. Just forty minutes before the attack on Pearl Harbor, Japanese forces landed in Malaya at Kota Bharu in the Malayan state of Kelantan and on the Thai coast of Singora and Pattani. This marked the beginning of the Malayan Campaign.

However, the looming clouds of war had already begun gathering since the start of the Second Sino-Japanese War and Britain’s involvement in war in the European theatre. Reinforcement troops from Britain, India and Australian were sent to Malaya. In fact, preparations of the civilian population in Singapore for an impending attack were already underway.

Initially, the British colonial administrators did not wish to cause panic and began with air raid precautions and training the local population for basic civil defence. Eventually the war preparations became more overt through screening of the population and training locals in volunteer forces from 1941 onwards. 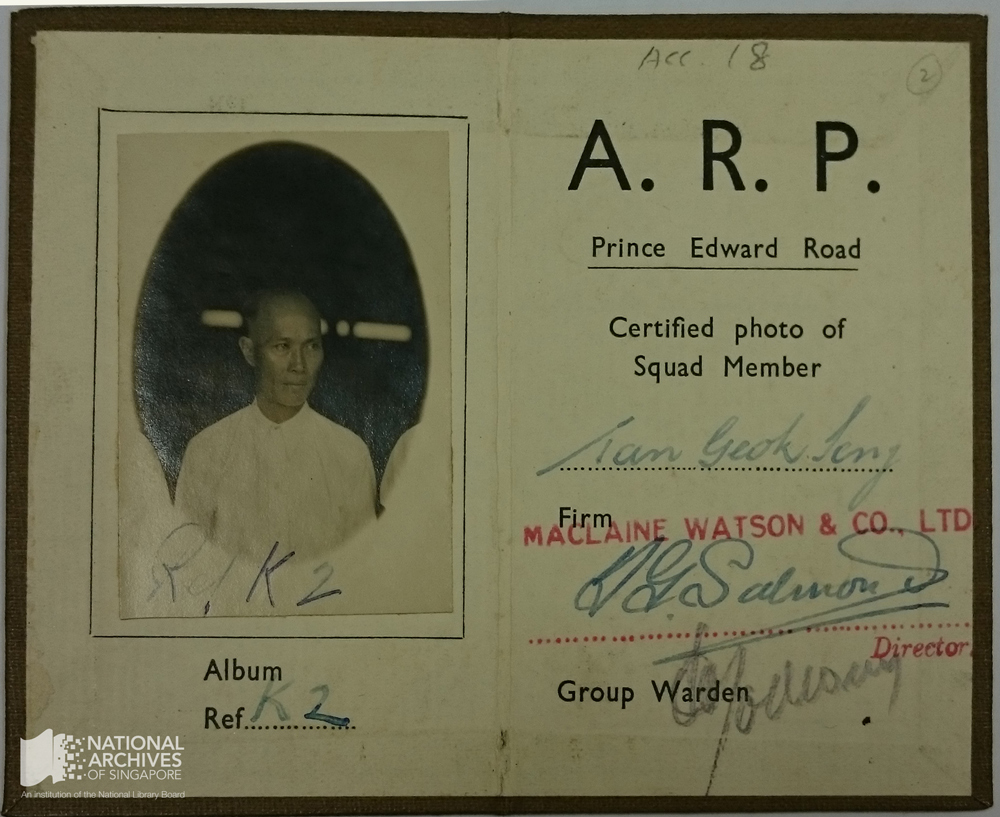 When the Japanese conducted air raids on Singapore, some were ready to put their training into action.

I was in it as a civil defence worker. We faced quite a terrible time, at that time. I think it was in December, 23rd of January or so, we had a blitz of these places, Beach Road market, and Jalan Besar area and all that. At that time, I was in charge of these wardens in Victoria School. We had to assist the people who were wounded, to carry them and take them to the first aid, medical aid depot… And I saw [in] that one day people working so hard, were so tired. I mean, so many people were wounded, dying. Of course the civil defence workers, they did their job. And my brother was the senior medical officer in that place in charge of the first aid, along with other doctors. And the whole day they were busy, trying to get them first aid or trying, trying to stop the blood flowing and then putting them in ambulance and despatch them to the hospital for proper treatment. Houses were destroyed, splinters falling on people and killing them. Oral history interview with Valuppillai s/o Pandarapillai (1983), Accession Number 000339/4

Some initially had high hopes for the British to defend Singapore:

Of course we were not too alarmed about the whole thing. Of course, it did give us a fright, I mean, first time experiencing air-raids. But we all believed, I suppose, that Singapore was an impregnable fortress and Singapore would not fall and all that, blah blah blah. So we thought at least the forces that were here would be able to defend Singapore. Oral history interview with Ronald Hubert Barth (1984), Accession Number 000394/5

However, with the continued air raids and defeat after defeat of the British forces in the Malayan campaign, confidence began to waver.

Well, it wasn’t a very nice feeling to… You know in those days, we thought that the British were so mighty that nothing could… no one could touch them. It was a nasty feeling suddenly, to see these planes coming 27 or 9 at a time sailing through the sky, with not a bit of opposition. And just dropping bombs as they wanted and going off. That was a nasty feeling, and sort of hurt to one’s pride that this could be done to one.” Oral history interview with Arshak Catchatoor Galstaun (1982), Accession Number 000170/7

This short selection of oral history interviews and private records in the holdings of the National Archives of Singapore gives us a multi-faceted perspective of civilian life at the start of the conflict in Singapore.

Stay tuned for the opening of the exhibition at the revamped Memories at Old Ford Factory for more records that highlight these diverse experiences of war, occupation and its legacies!